Yesterday, a man set himself on fire...

Think about that for a moment. Just close your eyes and imagine seeing a man pour gasoline on himself, sit down, and set himself on fire. 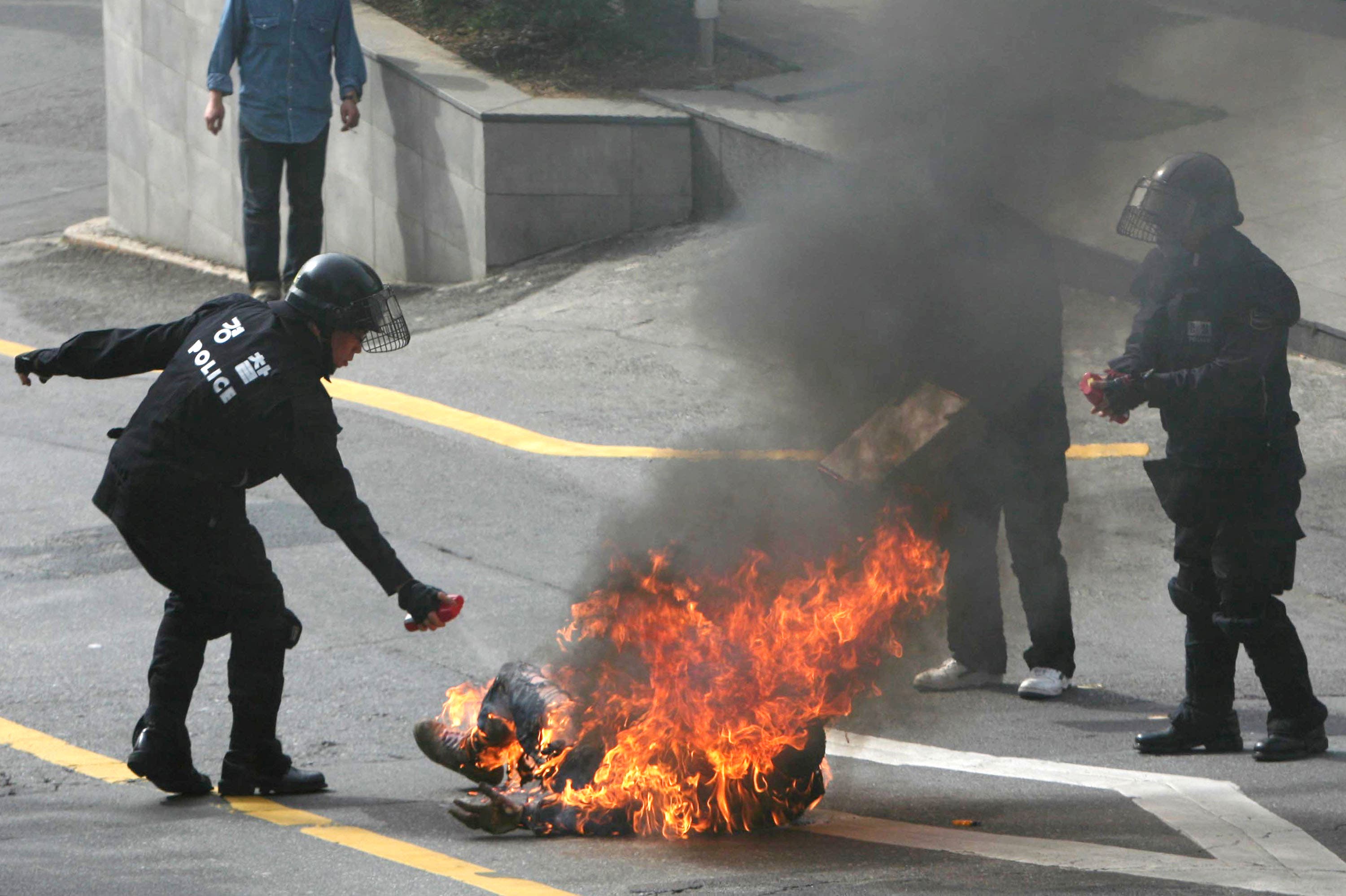 In what state of mind must one be to commit such a choice? There are multitudes of alternative suicide methods out there. I won't list them. However, certainly, there had to be a less painful alternative other than self-immolation. In any case, I can only think of one state of mind, state of being, that would instigate such a course of action. This is pain.

This man had to have been suffering for an extended period of time before he decided to set himself on fire. It had to be, to some degree, on the surface and underneath it. To choose to go in a blazing glory is to end an extremely painful life in an extremely painful way. Even with extremely strong drugs, that had to sting.

And I suspect, when people were trying to save him, he was also experiencing something else. Fear. On his ride on the ambulance, a small part of him might have been afraid that they might actually save his life. As if whatever pain he was feeling wasn't enough, he would suffer even more alive with the scars of his attempt at his life. The confinement that comes with failed suicide attempts. He might have been afraid that he hadn't escaped the life he was trying to end. Perhaps he was afraid there was no escape from whatever he was trying to get away from. It could have also been fear of making a mistake. Perhaps, after he was on fire, he realized just how bad of a decision he had made. And even though he didn't want to die, as the fire ate away at his skin, he sure hoped the burning would end soon. When his rescuers came, was he glad they put the fire out? If so, did he suffer some degree of fear knowing that their efforts were for naught, and that his bad choices had finally caught up with him? There was no getting out of this one. This last cry for help was his last cry.

A man set himself on fire.

Some people will just brush it off as just another crazy. Oh, just another mentally ill person who probably went off his meds. America does have a lot of people who are taking medication; but people use medication to treat problems that already exist. A lot can be said for this nation's people, and our state of mind. What we should be focusing on is the trigger. People don't just go crazy on their own. There are environmental factors that trigger people.

There's this common saying: "Guns don't kill people. People kill people." Why do they say that? Because in order for the gun to go off, someone has to pull the trigger. In order for a person to go off the deep end, someone or something has to push them over.

I think it's time we all give each other a break. We all have problems. We're all just a little tired of working all the time. We're all trying to make a life for ourselves. Most of us want love. Most of us want peace. Most of us want to be able to just co-exist without being beaten on physically or psychologically. Can't we all just give each other a break? You can't pass a single comment section without seeing people insulting each other. You can't go anywhere online without seeing people arguing over partisan politics or religion.

People don't even let you co-exist peacefully with them. They scheme. They gossip. They dig. They ostracize people. They interfere in other people's associations, friendships, or relationships. They talk smack about people constantly behind their backs. They lie about what other people do, think, or believe as if they know somebody. (I had a manager intentionally insinuating lies about my sexual orientation to guests/customers/clients and co-workers. It's as clear as sunlight in the summertime on a cloudless desert that I'm straight. That doesn't stop the verbal defecation.) They intentionally manipulate people to take their sides because their sides are too trifling to be agreed upon without coercion. Everyone is in everyone else's business. Mind your own business. Do you. There has got to be something you can think about or do outside of messing with other people. We don't have to like each other. However, we can certainly shut our mouths and work on ourselves.

So many people feel the need to be on guard. You can't trust people. You can't live peacefully, because some people just don't want peace. Some people just want to cause pain for their own sense of humor or justice. Someone says or does something that upsets them even in the most trivial way, and they want to assert themselves. It's got to stop people. Put yourselves in a box and work on yourselves. It's not about what everyone else is doing or saying. It's about you.

I want you to know something about me. Never in my life have I been as content as I have found myself in peace with me and God, and family. Now, if you have a dysfunctional family, you can rest assured that you and God is enough. If you don't believe in God, you still have you. Read a book. Play a video game. Watch a movie. Play a musical instrument. Don't know how to play one? Learn one! You can learn one at any age. Don't have the money to buy one? Find one on craigslist for cheap or post a request for a free one online and say, you don't have the funds but really want to learn. There are good people out there who will actually give you stuff you can use to practice. Take up crafts. Sculpt. Knit. Take up cooking or baking.

Stop arguing over pithy issues. Stop meddling. Stop gossiping. Stop slandering. And certainly, stop casting people off as mentally unsound or socially awkward. Mental illness is only a sliver of the problem. Society is the main problem. (Have you ever noticed how many jerks and gossipers fit well into crowds?)

A man set himself on fire. He was not the first. He will not be the last.

We all need a break. Let's all just give each other a break.
Labels: love peace self-control