Release date for 'The Catalyst'

My loves, and many others,

For those of you who do not see or speak to me, it is with great pleasure that I announce my debut novel! 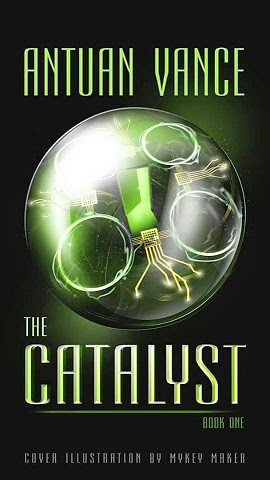 When Earth's greatest enemy returns, Lukas Brown must send his daughter and protégé west on a dangerous cross-country mission, and retrieve the key component to the world's survival, THE CATALYST.

But the road west is filled with more delays and challenges than expected, and Lukas discovers there's more to their newest threat than meets the eye.

'The Catalyst' is book one of a series of three novels (and possibly one novella).  On Monday 20 April 2015, the paperback is set to release for sale online on popular website Amazon.com, and then gradually, through the week, Barnes & Noble, Half.com, Books a Million (BAM!), and many others.  I will announce the releases and links sites on my author’s page on Facebook as they become available.

Not long afterward, the Kindle version will release!  For those of you out there who are like me and want to carry around more than one book at a time, you will be able to order it through Kindle.

Here is a short excerpt from my book:

“Flick,” was the sound of the light switch and the room flooded with photons.  Abbey could feel her consciousness rushing forward, her dream-state slipping away, and didn’t want to believe what was happening.  No!  Not now, she thought.  With all her mental might, Abbey struggled to hold on to the final moment.  His strong arms had pulled her towards him.  He was just about to kiss her.

“Wake up, honey.  You have to wake, now,” a deep, strong voice urged while shaking her left shoulder.

She pulled the pink blanket to her neck and blinked her light blue eyes to the familiar, wrinkled face of her father.  “Ugh, I’m tired,” she mumbled.  It came out as tiiiiiiired in a drawn out whine.  She turned over and attempted to continue her slumber.  “Let the rooster crow.”

“Awwwww,” she whined and yawned.  She pulled the blanket over her golden blond head.  “I don’t wanna,” she continued, her words muffled under the blanket.

“God have mercy on our souls,” he pleaded to the Lord under his breath before completely pulling the blanket off the bed, almost yanking her off too as he tossed it on the floor.  “Abigail Lynn!  This is an emergency situation.  Get up, now!”

What the?  Her eyes blasted open, disbelieving.  She shot straight up, almost giving herself whiplash, and looked into the desperate man’s eyes.  As far back as she could remember—and though she hadn’t put much thought into it, she had a flawless, photographic memory—the only emergency situation they’d ever had was when her grandmother died of radiation poisoning, a gift from the Red War.  Even then, he never pulled a stunt like this.  “What the heck, dad?”  She pointed at the clock; her eyes were still adjusting to the light to see it clearly.  “It’s way too early o’clock in the morning.  What’s going on?”

Ignoring her question, which annoyed her, he went to her closet and pulled out her emergency backpack, supply satchel, and other accessories, which he stockpiled in her otherwise organized closet.  He told her they should be prepared months in advance for the day he knew was soon coming, without giving any specifics as to what exactly was going to happen.  “Tomorrow is just a matter a time”, he’d said, as if that meant anything.  He tossed the backpack and satchel on the bed and briefly ran to the window, peering into the cloud-filled, moonless darkness.  “There’s no time to explain it all, right now.  I’ve already explained it in my notes, which are in your satchel.  You’ll have to listen to it on the way.  Now, get dressed.  Make it in layers, heavy for cold weather, and light for warmer weather, but not too heavy so it impairs travel on foot.”

Dress in layers?  Travel on foot?  Abbey thought, shaking her head and refusing to be afraid.  She remembered the horror stories he told her of the war.  The mass destruction, death, and panic that swept the planet leaving billions dead, millions of sick people drifting for years before civilization finally collected itself.  Looking at the backpack, satchel, and her father’s erratic behavior, she raised her hands, palms forward, as if to slow someone’s forward momentum or push them away.  “Dad, what’s going on?  I need some information.  You can’t just barge in here, wake me up, and start, like, I don’t know, flipping out without telling me what’s going on.  I’m an adult now, in, two days.  I need to know what’s going on.”

Frustrated—at least, he looked frustrated—he turned from the window and checked his watch.  Someone was late.  He checked his phone.  No messages.  He put his right hand over his eyes and sighed.  “Okay.”  He took a minute to compose his thoughts while eyeballing his watch.  Every minute counted, and if he could pay for it, he’d willingly spend a drop of his blood for every minute he turned backward to give them more time.  “The Red are back.  Well, technically, they were never completely gone, just in hiding.  The last few survivors of a dying race hemmed up in our corner of the world, waiting for us to get comfortable.  They’ve taken over our research facility, and the restoration device, and are going to use it against us.”

Abbey felt her heart briefly stop.  A chill rose up her body.

“At six o’clock,” her father pointed to the clock, “three hours and twenty-two minutes from now, every human being within a hundred mile radius of our research facility is going to die.”  He stopped.  She could tell he was weighing her response, which was a mixture of terror, shock, and horror.  Everyone she knew was about to die.  “For now, you’re going to a safe, secret bunker with Levi ninety miles northwest of here—”

As she commonly did, either without realization or care, Abbey interrupted.  “Levi?  What about you, dad?  Aren’t you coming with us?  Won’t you die here?”

“—in the Blue Ridge Mountains and the Quarantine Zone—”

“He’s going to keep you there,” he continued, “and safe until it is okay to move again.  Then, you’re going to Montana—”

“Hold on!  Montana?  How are we supposed to get to Montana from the Blue Ridge Mountains?  That means we’d cross the Devastation Zone, and, the Rogue Districts, and, the barren plains.  How will we survive?”

“I have a facility there designed to support you two long-term, in the event the restoration now destruction device does as much damage as I expect it very well will.”

She shook her head.

“After all these years, and despite my strong grasp of medical science, I am amazed that head of yours hasn’t come unhinged,” her father said.

Abbey pursed her lips.  “You didn’t answer my questions.  Why aren’t you coming?”

“Start getting dressed and I’ll explain, okay?  In layers.  Underlings, tees, jeans, jacket, preferably something with a hood.  Make sure you have plenty of pockets.  You’ll need a lot of pockets.  You get the idea, right?  Survival wear.  Your best stuff.  You won’t be able to come back here.”

“Okay!  Okay!”  She rushed to her walk-in closet, partially closed the door so she could get dressed in privacy, and prospected her wardrobe, which was more than fair in size compared to most people this day and age.  “But, you’re coming with me, right?”

“No, honey, I’m not.  Levi is.  As you know, I have been working on the restoration device, the cradle as I call it, for years.  I have a responsibility to finish what I started.  I have a responsibility to stop them from killing everyone; and I’ll try my best.  However, it can’t involve you and you won’t be safe here.  I suspect you won’t be completely safe until you reach Montana.”

Briefly, she stuck her head around her closet door.  “But I’m going to see you again, right?  You’re coming to Montana, right?”

He smiled and said, “Yes, of course,” but his eyes said otherwise.  His eyes were solemn and dark.  The hazel of his eyes had faded, as though death was so inevitable it had already taken claim of his body and sheer will alone allowed him to warn his daughter.  His eyes said: This is it, kid.  This is the last time you’ll see your father.  Soak it up.  Take a picture; it’ll last longer.  And in that moment, standing there half-kept in her closet, Abbey recorded an image of the man she would always love and compare every man to: the strong, brown and silver-haired, oval-headed scientist in his long, white lab coat.  Lukas Brown.

My loves, my dearest brothers and sisters in Christ, please pray for me and the success of my book.  There are many things in life I am truly grateful for: one of which is my reformation and salvation through Jesus Christ, another is my talent in writing, and another is the continued support and love of my family in Christ, who I am honored to see every Sunday, and even more honored to see for an eternity in the Kingdom (soon to come).  The Lord has given me enormous gifts.
Labels: books Kindle reading The Catalyst writing